A Hub for Humanities Scholarship

Daegu and the larger Gyeongbuk region are rich in both assets and history concerning the humanities. The region played a key role in major national civic movements that helped shape the identity of modern and contemporary Korean history. In 1907 the National Debt Redemption Movement was established in Daegu in order to combat Japan’s economic domination of Korea. It was the first nationwide donation campaign, the first media campaign, and the first movement with women student participants. In 2017 the archives of the National Debt Redemption Movement were included by UNESCO in the Memory of the World Register.

Daegu is also home to many architectural treasures from the modern period, including “Daegu Modern History Street,” a complex of alleyways that contain preserved buildings from the colonial period. In the surrounding region, there are also many sites that are symbolic of modernism, including Gampo port in Gyeongju and Guryongpo port in Pohang.

Because of their identity shaped by historical events, the people of Daegu and the larger Gyeongbuk region have developed deep roots in the humanities. The humanities are more interested in raising and exploring questions than finding answers. In the spirit of discovering new questions, Daegu is putting a lot of effort into building digital archives and records of humanities scholarship. In particular, the Institute of Humanities Studies at Kyungpook National University serves as a hub of scholarship, widening the discourse of East Asian studies archival culture, while also pursuing the objective of undertaking “interpretive” humanities research. Achieving a balance between state-of-the-art technology and the analog traditions of history, finding harmony between preserving historical memory and building a future-oriented society, Daegu in general, and the Institute of Humanities Studies at Kyungpook National University in particular, would serve as the ideal location for hosting the AAS-in-Asia conference.

Korea’s balance of historical traditions and contemporary culture make it a popular destination for visitors from around the world. As the third-largest city in the country, and also because of its special place in Korean history, Daegu is particularly emblematic of this mix of the old and the new. The city’s current name, literally meaning “large hill,” dates back to the 8th century. Located between the port city of Busan and the capital city of Seoul, Daegu has been a prominent center not only for commercial trade, but also for Buddhism and Confucianism. Nestled in one of the oldest and historically rich regions in Korea, Daegu houses many cultural landmarks and is located near several UNESCO World Heritage Sites, including Gyeongju, Andong Hahoe Village, and Haeinsa Temple, which is home to the Tripitaka Koreana. Daegu also has many must-see attractions, including the oriental medicine market, which has been in operation for over 350 years. AAS-in-Asia 2023 participants will have a chance to explore Korea’s heritage in Daegu. 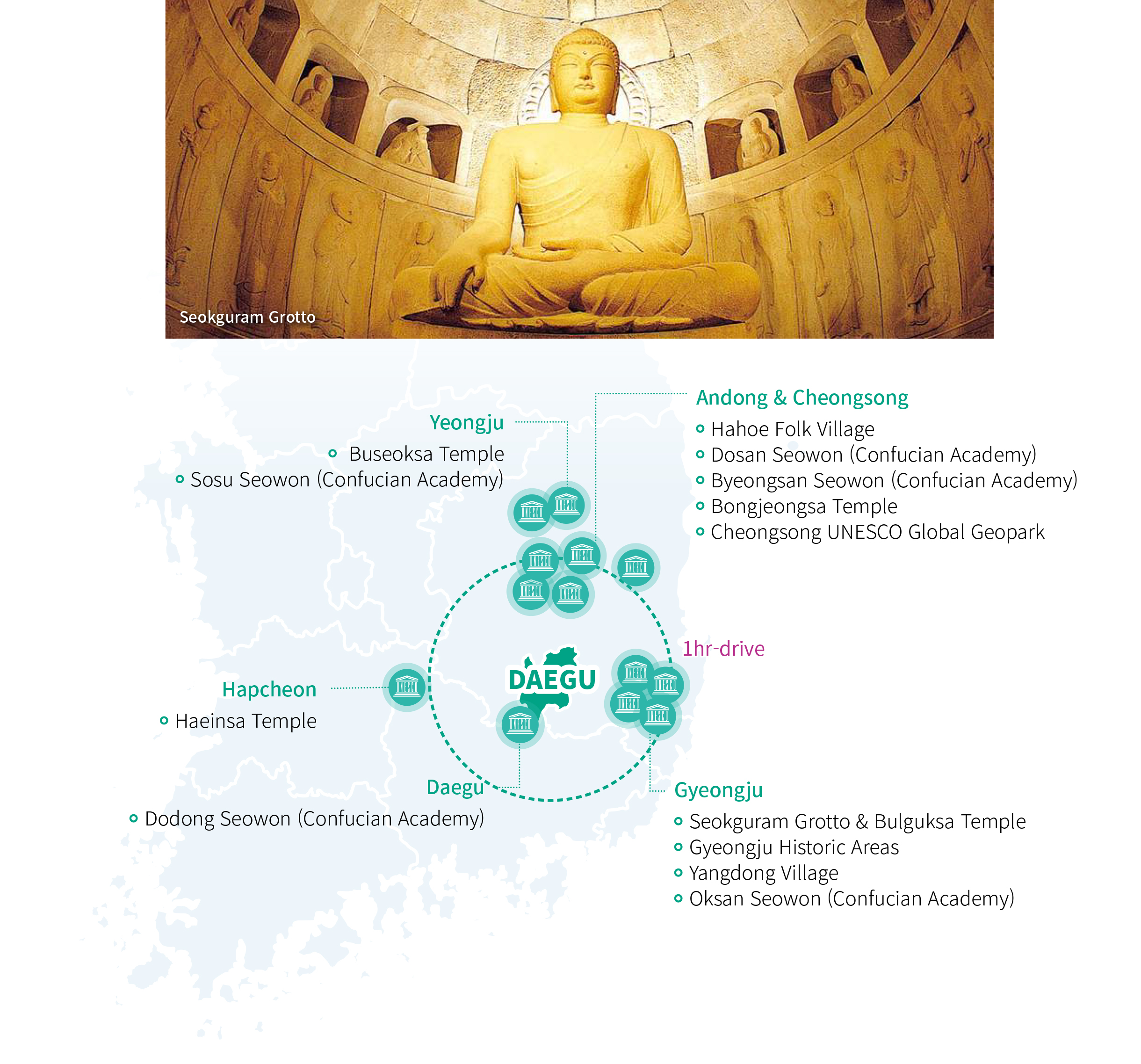 Korea is conveniently accessible from most major cities in the w orld and within a 3-hour ﬂight radius of one-third of the world’s population. From Daegu’s location at the center of Northeast Asia, the city offers excellent transport links to the rest of Korea and the world. 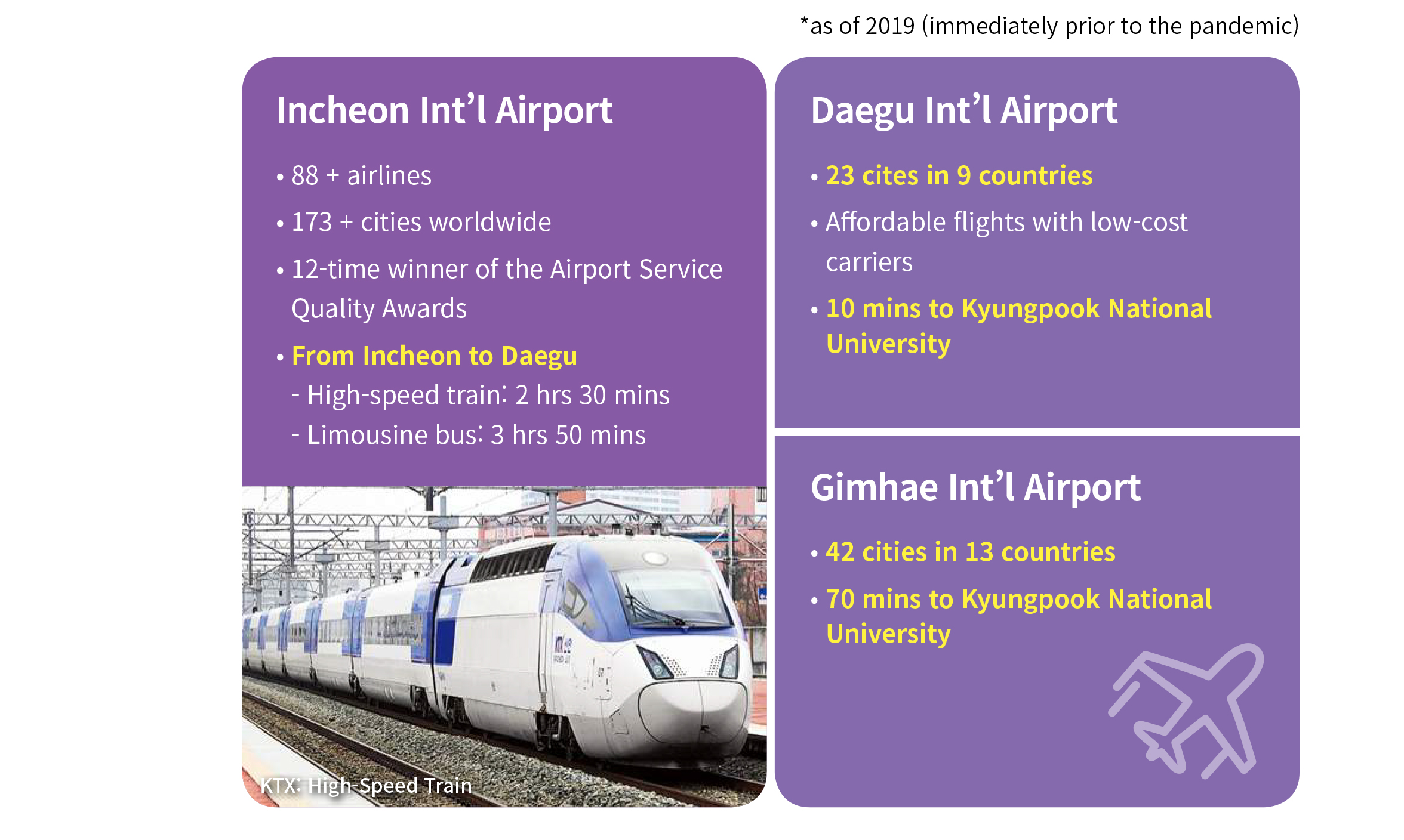 Getting to Daegu: 3 international airports 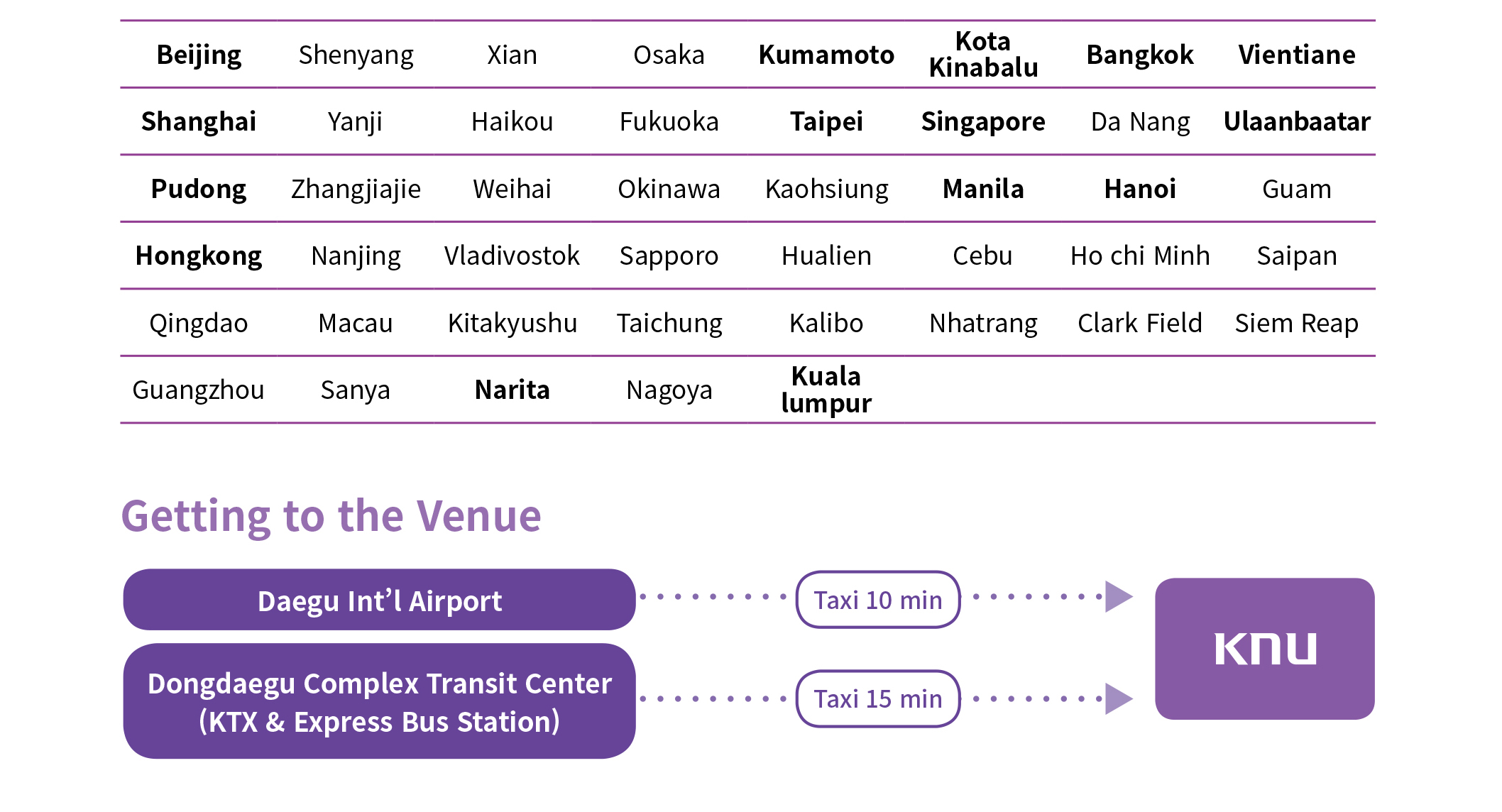 Getting around the city: Ultra-modern, ultra-efficient public transportation system

Daegu's conference infrastructure offers accessibility and convenience so AAS-in-Asia attendees can reach their destination easily, move about the city freely, and relax after a busy day.